Lake levels are down a bit, not much, but enough to trigger a change in flows at Beaver and Table Rock lakes.  Spill gates were shut and turbine operation was reduced.  Beaver is still high.  It’s at 1,128.4 feet, eight feet above the seasonal power pool.  Table Rock dropped to 916.5 feet, 1.5 feet above  pool.  Bull Shoals, on the other hand, is dumping some serious water.  Between turbines and spill gates, more than 26,000 cubic feet of water per second is flowing.  Its lake level is 671.1 feet, 12.1 feet over pool.  It’s dropping more than six inches a day at this flow.  Bottom line, the U.S. Army Corps of Engineers needs to move a lot of water through this system before the rainy season is upon us.

Back on Lake Taneycomo, we’re seen two units of water running nonstop since the gates were shut on Saturday.  That equals about 7,000 c.f.s. with the lake level at 707 feet.  The loss of water and current almost immediately upped trout “catchability” (not sure that’s going pass Marsha’s editing.)

Starting at the dam, boating shouldn’t be much of a problem — there’s plenty of water depth to get there at the 707 feet level.  I fished Monday with long time friend John Johnson.  He drifted a double scud rig using a #12 gray scud, and I threw a black/yellow 1/16th-ounce jig (two-pound line) and neither of us did exceptionally well.  But the rainbows we did catch were big and colored up in their Sunday best spawning colors. 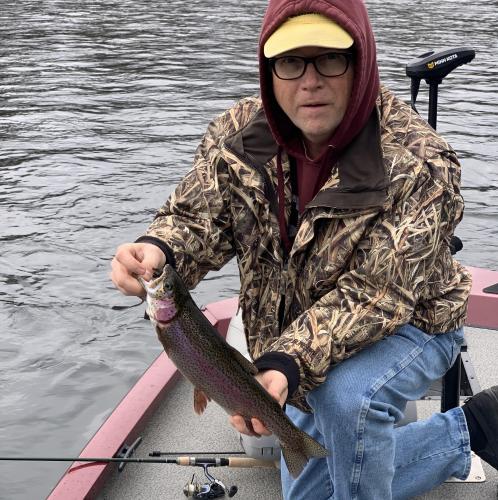 Drifting from Lookout down through the Narrows, we did better, but the rainbows were a little smaller.  That’s where most of his group has been fishing.  Sunday afternoon they did very good drifting scuds through this same area.  Guide Duane Doty said his clients caught their fish drifting from Fall Creek to Short Creek with scuds.

For me, this flow is perfect for throwing 1/16th-ounce jigs using two-pound line.  I fished Monday morning just up from our dock, working the middle of the lake and did well, but did much better after I moved to the bluff side of the lake.  The black and yellow jig did the best.

I did see a big swirl against the shallow bank close to the water pump station.  Whatever it was, it was huge — and hungry — but It did not want my jig offering.

With this new flow, we’re back to using small weights to get our flies and/or bait to the bottom.  One-eighth-ounce bell weights on drift rigs should work okay, but if that’s too heavy, pinch on a split shot instead.  All you want to do is tick the bottom.  Off our dock, use enough weight to hold on the bottom using PowerEggs or salmon eggs.

I’m sure the flow is great from Cooper Creek down for using the pink Berkley’s Power Worm under a float.  I’d start four feet down and go deeper from there.  Use four-pound line, although two-pound would get you more bites.

Try drifting from the Riverpointe Estates boat ramp down, staying in the middle of the lake and fish with a jig and float.  Use a two-pound leader to the jig. Good colors would be black/yellow, brown/orange head, pink or sculpin/peach with an orange head.  Start about four feet deep and move deeper until you find the right depth. 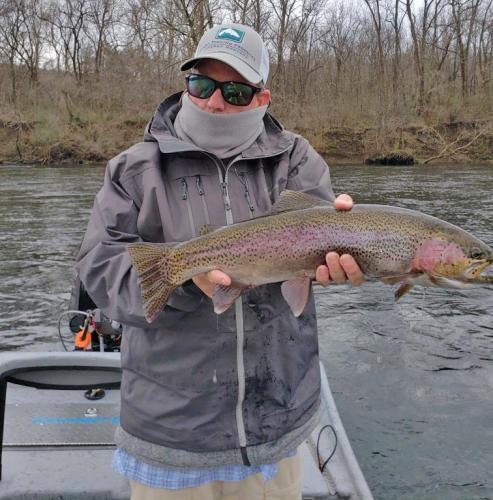 Fly fishing using a scud under a float should work well as long as you get the scud to the bottom.  Use a big enough float to float the scud and the weight needed to get it to the bottom.  Fish the scud at least six- to eight-feet deep just about anywhere and go deeper if needed.  I believe we’re going to have to go to a smaller scud now that the water is slower, so if the 12’s aren’t working, go smaller.  I caught a rainbow the other day that was spitting up small scuds as small as #16’s.  Use gray, browns and I’d try a tan or orange scud.  They don’t have to be weighted scuds.